Wookie was born September 7, 2010. Holly owner-handled her to her championship by 17 months. Wookie was fun-loving with a higher energy level. She enjoyed joining Jeff rollerblading, bicycling and skiing. She loved the snow and adventured from Yosemite, the Grand Canyon (North and South Rims), to Sequoia National Park, and many stops in between.

Wookie was fun to live with - always learning and willing to follow our lead. We trained her at home; we lived too remote to attend classes. In 2013, she was 1st at GSMDCA Nationals in Rally Novice A to finish her RN title (score 97/100). RN stands for "Rally Novice" --a type of obedience title, earned by passing a course at three shows. Wookie earned 2 legs in Rally Advanced A, including 1st place (score 96/100) at an ALL BREED trial October 2014 in Pleasanton, CA, We are so proud of Wookie and the teamwork demonstrated.

Wookie crossed the Rainbow Bridge on November 13, 2014.
We will always grieve our big girl, taken too soon.
Wookie's Health Clearances Official Link to Clearances at OFA Site
OFA publishes the clearances; You can see results from a independent source. Wookie passed all clearances recommended for Greater Swiss Mountain Dogs.

REGISTER OF MERIT: Wookie produced five or more AKC champions and is honored by the Greater Swiss Mountain Dog Club, joining her mother and both grandfathers on this list of Swissies producing quality offspring 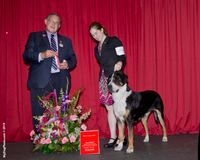