Gandalf is a large dog at the top of the standard. He exudes confidence and is full of positive energy and playfulness. He is sweet like his mama Wookie and focused like his father Hero.

Among his many excellent features, Gandalf has an always level topline, a very thick black coat and incredible bone and substance. He has dark pleasing almond-shaped eyes.

Gandalf finished his AKC Championship with all major wins. He was shown to two four-point majors in 2014 by DaLena and two five-point majors in 2015 by Holly, finishing on July 18, 2015 at just over 2 years old. To finish his championship, Gandalf went Best-of-Opposite over champions. The next day he won Best of Breed to finish off his winning weekend.

He finished his Grand Championship in 2017, going Best of Opposite at both the Cascade GSMD Club Specialty in January 2017 and at a regular all-breed show in Albany in April 2017.

Gandalf has passed all health tests recommended health tests for GSMDs and has been assigned a "CHIC" number for posting these results.

Gandalf is owned by Christine Zieverink and lives in Portland OR. He was bred by DaLena Christensen of Snowy Mountain Farms and Holly Webb of RODEO. 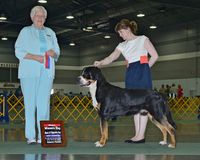